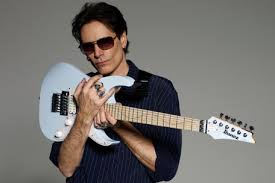 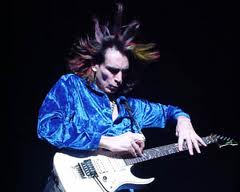 I still remember the first time I heard Steve Vai playing. Guitar player magazine used to give away these strange little floppy seven inch singles in a plastic bag glued to the cover. They were great! Anyway, just when I thought I’d heard everything that could be done on a guitar along comes “The Attitude Song” on one of those little records. Wow !! 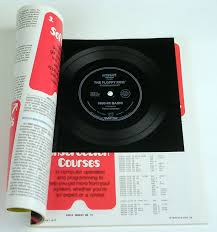 Me and my circle of burgeoning guitarists couldn’t believe what we were hearing.  This was the fastest playing, coupled with a barrage of mad tricks and sounds we had ever heard being wrenched from a guitar.  We were already struggling to learn Ritchie Blackmore and Tony Iommi riffs and solos when along comes this whole new world of playing.

The Guitar Player singles came with a transcription of the song in guitar tab, which also had notes from Steve on how to do the various tricks in the tune. These were also something of a revelation: “use the whammy bar to drop the strings right down to blubberland then back up to the moon”, and “pull that top E right off the frets till it squeaks like a mouse”, were two I remember.

So we learned as much of the attitude song as we could and then when Steve Vai’s music became obtainable in the UK, we grabbed as much as we could find. With the incredible playing though came a special guitar and amp set up that was hard to duplicate on our strats and second hand amps. We had never heard of Carvin amps and were far too “trad” to use Ibanez guitars – especially ones with 7 strings.

Soon after Steve vai arrived on the scene a whole new league of Berkeley trained, uber fast guitarists followed. It seemed like very guitar store had the latest pointy-headed guitars and kids playing Steve Vai licks. It became almost like a contest and that style of playing for me became almost a novelty. Impressive though it was. It’s style over substance for me (I know this will be sacrilege to some but it’s just my opinion and like assholes we all have one!)

Steve Vai’s rise to fame came through the much missed FranK Zappa. Steve managed to transcribe Frank’s incredibly tricky solo on Black Page and sent it to him with a request to be in his band. Although impressed, Mr Z declined as he thought Vai was too young. Perseverance though led to Steve joining the Zappa line up for a time and to be the subject of “Stevie’s spankin”.

I won tickets to Steve Vai in Glasgow some years ago ( I was aiming for the 1st prize – a SV guitar ) and it was an interesting gig. With everyone competing to play lead everything it was a little exhausting but some unique and amazing sounds were produced. Personal taste aside Steve is a mind blowingly talented guitarist and there was a time in my own journey that he inspired and amazed me.