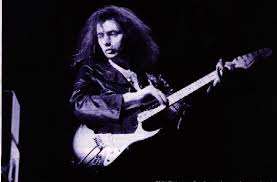 An old friend of mine was and is a complete Ritchie devotee (watch out Matt – it’s Jimmy Page next!) I’m also a big fan of the moody axe man whose work with Deep Purple, Rainbow and his solo work has definitely inspired the likes of Yngwie Malmsteen and many others.

Ritchie’s playing blends elements of blues, jazz and classical into a heady concoction of Strat based power and melody that has made his influence on hard rock and heavy metal legendary.  I’ve had the pleasure of seeing him in action several times and was once the backstage guest of DP during their ‘85 comeback tour – although sadly the man in black didn’t deign to appear at the afters party in the Birmingham NEC.

I’d credit Ritchie Blackmore with the creation of the neo-teutonic influence on heavy metal that has spawned many copiers since the hey day of Mk2 Purple in the late 60’s. His extended use of harmonic minor and phrygian modes opened the doors for many of the NWOBHM bands that emerged in the 80’s and pretty much launched a new genre of guitar playing.

Lets not forget the image either. The black clad, medieval hatted minstrel with the intense face and showy posturing.  A perfectionist with a notoriously perfectionist attitude, Ritchie got through his fair share of band members – particularly in the ever changing Rainbow line-ups.

It’s been the white Stratocaster for Ritchie for most of his career although in the early days a Gibson 335 was his guitar of choice (no way a bigsby trem and hollow bodied guitar was going to withstand the Ritchie treatment though) Pickups and amps have changed through the years but essentially the Blackmore sound is delivered with a Stratocaster and a barrage of heavy duty valve amps. There is a strong medieval theme these days and Ritchie has also played lutes and other ancient stringed instruments to get his message across. 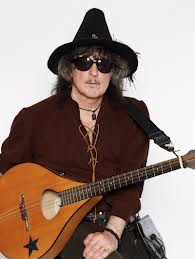 For my generation Smoke On The Water was one of the first riffs we learned – on one string first then later on two or three – just like Ritchie.  Such was the intricacy of his lead playing – especially alongside the keyboards of the late and great Jon Lord that it was some time before me and my mates could get a handle on it.  Now though elements of his style – the two note diad chords, the harmonic minor scales  for example have definitely been absorbed into my own style of playing and writing.

Ritchie Blackmore definitely deserves his place in the guitar heroes hall of fame for a huge body of superb work. Check out DP’s Machine head album for an entre, Rainbow Rising for a main course and Perfect Strangers for a dessert. Bon Apetite! 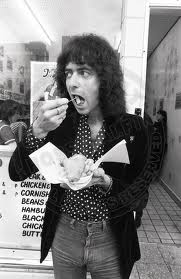