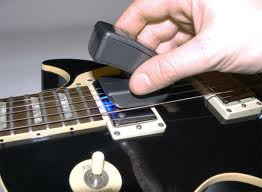 My friend Elmo has been using an Ebow for many years but it wasn’t something I tried myself until just a couple of years back. I quickly fell in love with what it could do and was pretty soon using it in loads of our songs.

It’s quite easy to start getting those viola and violin type of sounds with an Ebow after some tinkering around and playing with volume, tone and pickup settings. The Ebow parts in songs like Heroes by David Bowie or She’s a Star by James are probably the first things you work out by doing long slides up the fretboard and just holding the Ebow on the sweet spot of one string.  After that you’ll just let yourself go and experiment.

Experimenting with The Ebow Rocks !

As well as the long note thing you can also do very fast arpeggios across 2 or more strings by sawing the bow across them. You can also do this with whole chords once you’ve practised a little more with the timing and control of the thing.

If you combine these techniques with effects you can make some truly stunning sounds – the Ebow increases the output of the pickups so you can also get some great controlled feedback going with a touch of overdrive or compression. Try also using a slide and/or a wah wah pedal for some real class !

Guys like Peter Buck form REM have used the Ebow to great effect too in simple but cool sounding ways – listen to “Ebow the letter” from the underated New Adventures in Hi-Fi album.

It’s a case of experimenting with this gadget. You can move it along or across the strings, bend the strings and just play with that infinite sustain – swell it, choke it – any way you want to LOL ! Mine came with a little demo mini disc featuring some very fancy tricks you can learn but the joy of the Ebow is that there are no rules – just do what you feel – see what you can find.

Most of all it’s always cool to discover new ways of pulling new sounds out of your trusty axe  and working them into songs or jams – using an ebow does just that – pure inspiration in the form of a funky magnet thang ! Love it.