Over the years I’ve had a love hate relationship with multi-effects pedals for guitars. Recently however I dived back in and came out with a shiny new Boss GT100 and I love it. Here’s the story and a review of said unit. This is not a full tech review by the way you can find loads of those elsewhere. I really want to come at this from a creative angle.

The trouble I always had with multi fx units is the amount of tweaking they needed to move smoothly from one patch to another. That and the badly translated 400 page user manuals! You’d either get an undesirable drop or surge in volume or a nasty sounding, jarring change in sound. My favourite was an old Korg A4. It married well to the Hiwatt amp and Washburn Chicago guitar set up I had at the time (All of which were stolen from my car one night after a gig) I’ve also used products by Yamaha, Zoom, Alesis, Roland and Line6.

In the end I went back to a variety of single pedals in front of my Marshall TSL 122. That served me well both live and in the studio for years. After “The band broke up woo hoo – and it looks like – woo hoo – we will never play again” (RIP Frank) Those pedals languished in a drawer for a couple of years. They were replaced for home use and recording by my Line6 pod and Roland cube. A few months ago I decided maybe it was time to see if anything had changed in multi-fx land. There’s something to be said for an all in one unit after all. 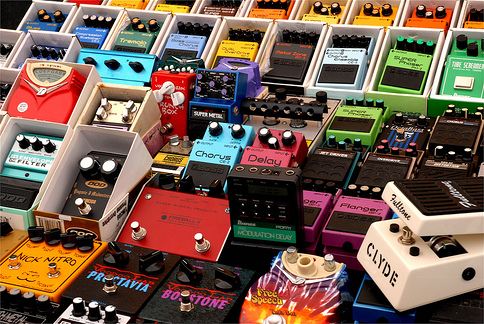 Internet research revealed that things had indeed changed a lot and that the Boss GT100 was a likely looking candidate. Selling all my old pedals netted enough cash for the asking price so I bought one. Maybe you’ve already discovered this gem but f not here’s my review.

The GT100, like many of its kind has 200 preset sounds and space for 200 more of your own creation. Like the Line6 pod and many modern amplifiers and FX units, its also an amp simulator. It contains COSM versions of all the old favourites and some newer amp exotica . They sound pretty good as do some of the preset sounds.

Actually you could do without an amp all together. With a decent PA and monitoring set up you could rock up to a gig with just a GT100. Similarly it replaces amps and mics in a recording studio. What sold it to me however was that it can also be used like a set of stomp boxes – without 200 cables and power packs needed to join them together and power them. Furthermore the pedals in question are from Boss’s renowned stable of stand-alone effects. 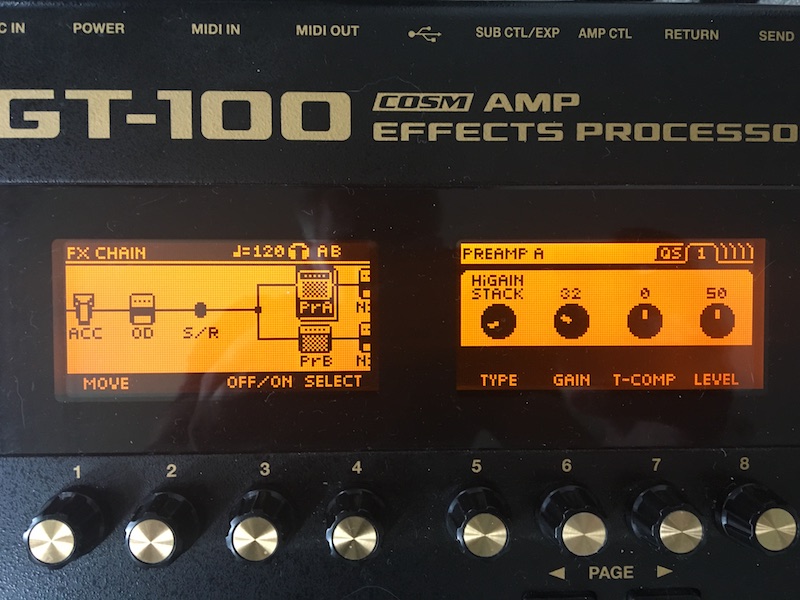 Better still, everything is tweaked via two big, well-lit windows and a series of knobs. There’s an expression pedal, a tuner and 8 footswitches which are well spaced. There’s also a looping function. It’s a quick learn and a nice solid dance floor to work on. Boss have even provided a quick way to get a genre specific sound. You just pick from a menu of musical styles and off you go. So far then, not too different from multi-fx pedals of old you might think. Think again though as we get under the skin of the Boss GT100…

Like many of us I’ve transitioned from digital workstations to recording music on my Macbook (see my Toontrack EZdrummer2 review to follow that journey) That is where the GT100 really comes into it’s own. Since as mentioned, the unit is designed for both live and studio use, it has a Usb output alongside the standard cable sockets. This has several functions. When recording into a DAW the GT100’s usb port can direct inject its output to a computer. Depending on what inputs your interface has the unit sends a clean signal as well as whatever patch you choose. If the patch isn’t quite what you hoped for you can audition others with the clean version using the GT100 as an AU instrument. 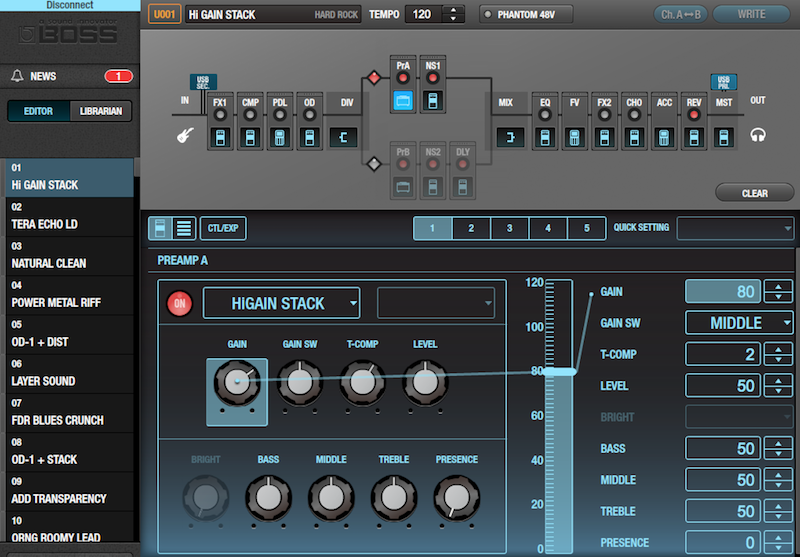 The USB connection also allows you to control the GT100’s parameters on your computer via BOSS’s downloadable Tone Studio software: You can move the effects around in the chain, adjust the individual effects parameters and save patches. Although the devices’s two main windows are excellent, having a big screen editor is fabulous.

Tone Studio also lets you build and store sound libraries of your own patches. This gives you the opportunity to store far more than the 200 user patches in the pedal board itself. You can also buy banks of preset patches created by big name guitarists and load them into your own banks. Rather than spending hours trying to recreate Dave Gilmour’s sound on Comfortably Numb for example, just buy it from someone who has already done it for you.

There’s one more possibility well worth covering here and that is the 4 cable method. Usually guitarists either plug effects or chains of effects straight into their amp’s input or if they have one, into its effects loop. If you have an amp with an FX loop the Boss GT100 lets you do both. Maybe like me you like the sound of your valve amp and would prefer not to use preamp modelling. No problem. 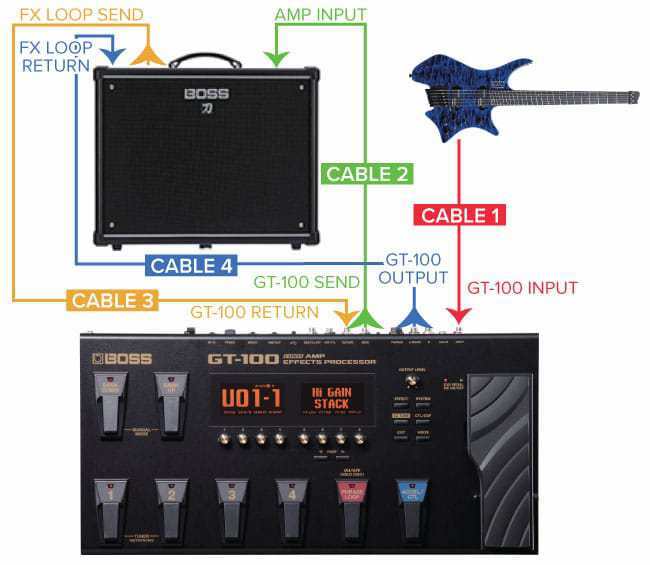 With the 4 cable method and the GT100’s moveable effect chain you can choose to keep your own amp’s unique preamp sound. You simply bypass the unit’s COSM preamp by placing it’s effects in the send/return loop. Of course you can also use those preamps if you want to and still use your amp’s power amp. All this offers a broad range of tonal possibilities you’d be crazy not to mess around with.

An extra bonus for me on top is that the Boss GT100 has made me friends once more with my old 60’s re-issue Stratocaster. It’s a beautiful guitar but I just haven’t been able to get the sound I like from it (until now!) For years I’ve favoured my Les Paul studio, only taking the Strat on tour as a back up. Since getting the Boss I’ve been able to make that baby sing for me like never before.

It’s been around for a while now so you’ll find loads of GT100 tutorials, tips and tricks on Youtube and elsewhere. In summary it offers a ton of sound possibilities and is easy to get the hang of. The result is that you spend more time playing than reading manuals and tweaking knobs. That’s a perfect for the Creative Guitar Lounge ethos.