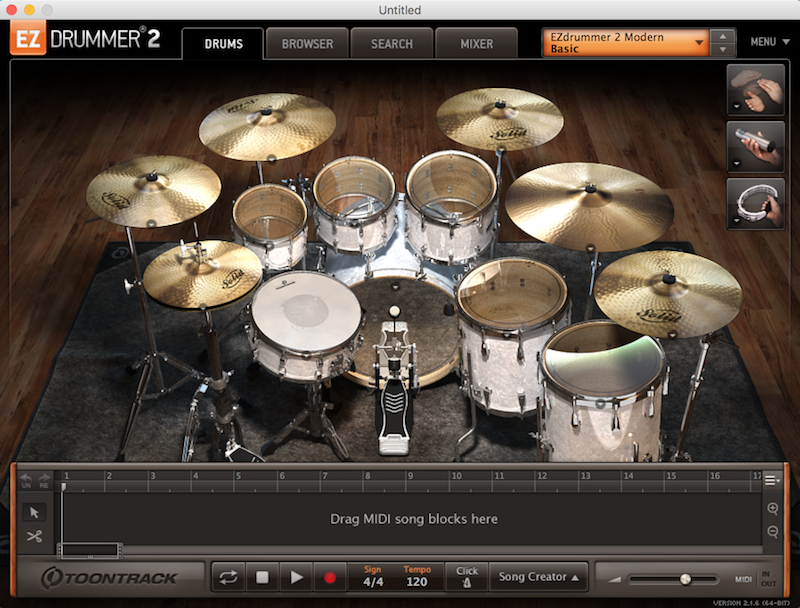 You might think a review of drumming software is a strange thing to find on a guitar website but there is good reason for it. If you have wrestled with the problem of creating drum tracks for your songs you will love this. I’m a guitarist and songwriter myself and as you’ll see from my journey below drums have been a real bugbear over the years. All that changed recently when I discovered Toontrack’s Ezdrummer 2 software.

Back in the day when I played in a succession of bands, drums were not my problem. The drummer did that. I wrote or co-wrote the songs and played guitar. End of. But things change. As we got better at our craft I got interested in recording. Basically we got fed up paying to record demo’s that a month later we weren’t happy with. Myself and my partner both owned little 4 track recorders and we started recording our bands with those.

EZ Drummer2 – Why You Want It

We would set up the few mics we owned in the barn where we practised. The guitar got one mic, the drums and bass amp shared a PZM – you know those little square plates that the police use to record interviews. Vocals got another. That left one track to use for overdubs. There was very little separation so a lot of the room sound got onto tape. Bizarrely this terrible set up almost got us signed by Creation records but that was down to an enthusiastic performance rather than quality sound.

In the quest for a better sound we then began a long, distracting journey during which drums became something of an obsession for me. We had a great drummer but capturing the sound of his drums perfectly as we progressed from a digital 8 track recorder to it’s 24 track big brother became a real headache. Through this journey I amassed a room full of mics, gates, compressors, samplers and god knows what else. The sound improved hugely from our early efforts but was still not perfect – no matter how many Jon Bonham samples I painstakingly layered over kick drums.

Getting It Done Fast With EZdrummer2

Finally, now working as a two-piece, I got into drum programming using an ancient but fabulous Atari sequencer. We also invested in an electronic drum kit. Neither of us were drummers but it seemed more natural to be hitting actual drums than typing beats into a midi keyboard or drawing them into Cubase. Plus we could just invite our drummer friends round to play on our projects. This got us by for a while but not until recently have I come close replicating the sound and feel of a drummer without one.

Lets face it, us non-drummers don’t really have a clue what these guys do! If you want to imitate them you really need to know what they can and can’t do with those four limbs. Short of taking drum lessons – which holds no interest for me whatsoever – how do you get round it?

Since selling our 24 track digital recorder to a local band I finally started giving serious attention to computer recording. About a year ago I opened the Garageband programme that came with my Macbook Pro. I’d had a brief look at it but nothing more. Somewhere I later heard that the latest version now included a virtual drummer. That got me really interested.

From Programming To Simplicity 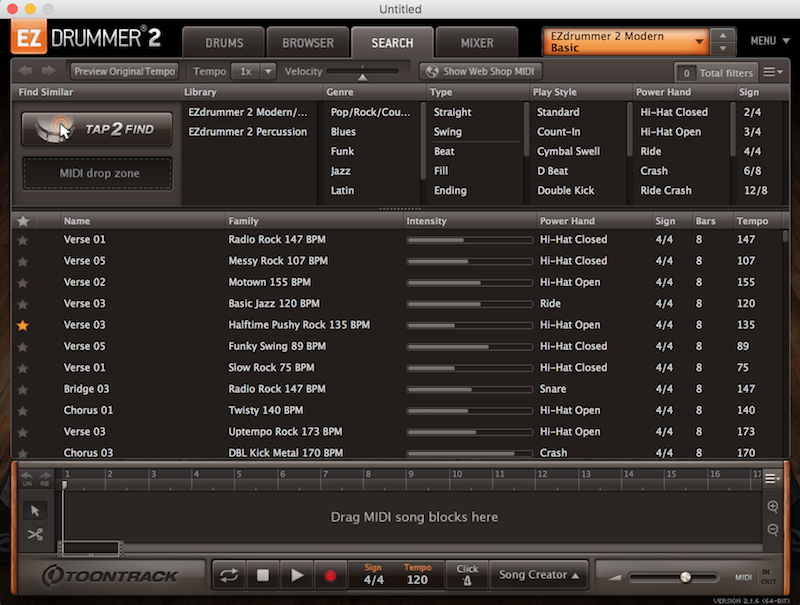 It seemed that at the touch of a few keys this would create “real” drum parts for your songs. It does! Not only that but you can audition several “drummers” with different styles to suit different genres of songs. Then you can tweak those parts. You can get them to play more or less fills, with more or less swing and add percussion. If you really want to you can even deep edit the parts and change the drum kits they play. Awesome.

It turns out that Garageband drummer is very good indeed. But recently things got even better in our little studio. Again, after some research I discovered EZdrummer2 by Toontracks. I took their free 10-day trial and then bought the full version at a little over £100. Its very, very good. In fact it’s very, very, very good. I’ll leave you to visit Toontrack’s website for the full details but here’s a quick sum up.

Ezdrummer2 is an upgraded version of their immensely successful (who knew) Ezdrummer. Apparently many music producers have used this for some years. It’s a standalone drum sequencer but can also be used with most software recording programmes (DAWs) as a plugin instrument. It’s like Grageband’s drummer in that it comes with a raft of ready to use drum parts in various styles but there is much, much more to it than that.

Unlike “Drummer”, the pre-recorded parts include fills, and parts designed for intro’s, pre-chorus builds, choruses, bridges and endings. You have infinite and very simple control of those parts. You also get full control over the impressive range of drums kits, individual drums and percussion pieces they are played on. One of the things I loved about it is that you can type a basic beat in to the programme with a midi keyboard and it will search its library for a matching part. You get a list of parts based on their percentage match to your idea– neat.

When you find the parts you want Ezdrummer2 will even arrange them into a song structure for you. You can cut and paste to your heart’s content and quickly assemble a complete drum track for your song. When you’re happy with the track you can export it as a wave or midi file ready to import into whatever DAW you use. Alternatively you can just select it as a plugin instrument and have it follow your project. But lets get to the really amazing thing about EZdrummer2: The drums!

The actual drum sounds in Ezdrummer2 have been recorded in Mark Knopfler’s state of the art studio. They’ve been played by top session drummers and recorded by world-class engineers using the best microphones money can buy. Visit Toontrack’s website for the full details. The sounds are divided into modern and vintage. In each section the actual drums used are listed and arranged in categories according to how they have been processed. That’s enough for me but if you want to go mad you can fool around with everything from mic placement to the overall mix of the kits. This is nothing short of wizardry.

Nothing IMHO can fully compare to playing with a band and a real drummer. But for those of us who don’t this really comes as close as you’ll get. No-one including most drummers will never know the difference. Years ago we worked with a drummer who could programme drums on an Alesis SR16 perfectly. NO-ONE we played the songs to spotted that it was a drum machine. EZdrummer2 makes that sound like the drum demo on a 70’s Bontempi organ. 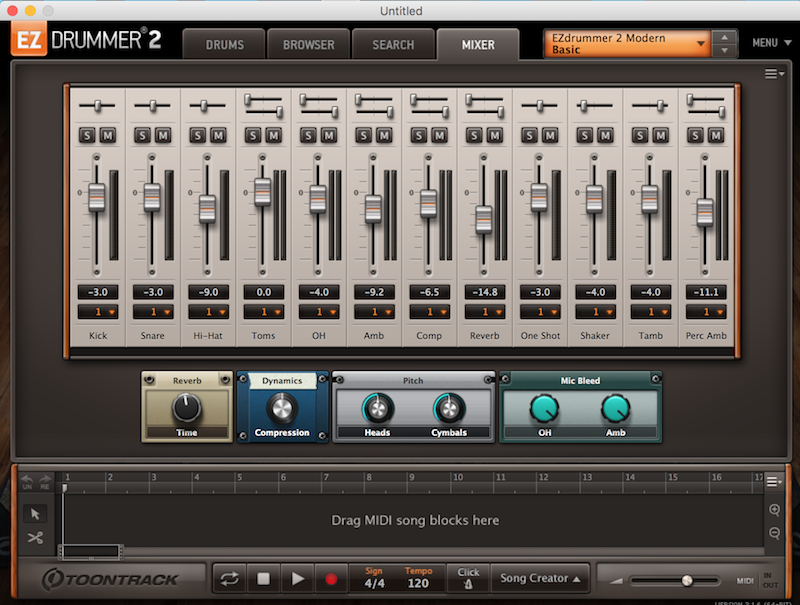 If, like me you just want a user friendly way to put together a brilliant sounding “real” drum track quickly with minimal tweaking, this is for you. I no longer want to get bogged down in deep editing midi. If you do then you can go ultra deep with this software but I bought it to get away from all that. Now I can just put a great sounding drum track together quickly. It’s even a great compositional tool. Toontrack also sells a wide range of additional sound libraries. They are comprised of grooves, beats and sounds covering every musical genre. Buy it.