Guitars are magical things. On the face of it just some wood and 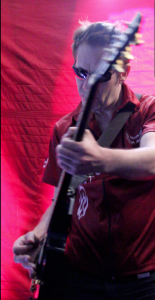 metal with wires that vibrate but when you couple that with the most boundlessly creative machine in the world – the human imagination – the possibilities are truly endless. It opens up a magical, invisible landscape of wonder !

Its up to you the guitarist how far you want to explore that sonic and emotional landscape – play a few chords to entertain or find your own unique self expression – it’s all good. Welcome to the Creative Guitar Lounge. My aim is to provide a resource for guitarists of all kinds.  By partnering with the best providers of guitars and equipment as well as online tuition I want this to be a great place to find info, reviews and useful content to fellow guitarists. 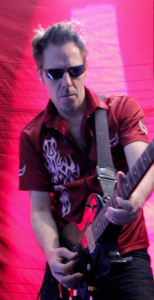 My journey with the guitar started properly when I was 12 and my folks gave in to my constant pleading and shelled out for my first guitar. It was a nylon strung three quarter sized classical number – not my ideal choice as I was inspired by the glam rock and then punk icons of the mid to late 70’s  – but probably a good start nevertheless.

The guitar came with the condition that I take formal lessons, which were delivered by a friend of the family’s slightly odd son – I say slightly odd because he was a classical guitar and lute player with long hippyish hair and a penchant for cold black coffee. He also had a Muppet doll suspended from his bedroom ceiling in a perfect hang man’s noose.

That aside he was a good teacher. Even though I wasn’t particularly interested in the works of Segovia at the time (I preferred The Clash) I stuck with it and definitely benefitted from the discipline and experience for as long as it lasted. I can’t remember why those lessons ended but I imagine I lost interest at some point as it really wasn’t my cup of cold coffee.

I next signed up for group lessons at a local hall. These were delivered by a guy called – I kid you not – Phill McCracken… And were more along the lines of easy listening, strum along classics like Country Roads, Tambourine Man and Leavin’ on a Jet Plane. I’d heard of a couple of the tunes but again not really my interest at the time. But I was getting better.

At some point I met other fledgling guitarists and we swapped ideas. Then I met the Electric guitar for the first time. I was totally smitten. I had to have one. So I saved money from part time jobs and eventually pitched up at Golumbs Music store (now long gone) in Glasgow with £65 – the asking price for the Kay Les Paul black beauty copy I’d been ogling through their window for months.

This was the real start for me but it was also nearly the end. I was brought up in a very quiet, rural part of Scotland and didn’t have any local pals who played guitar. With no one to compare electric guitar notes with and obviously no internet at that time, I quickly found the guitar so painful to play that it went into a cupboard for a couple of years. I didn’t know you could get different gauge strings (it had been fitted with very heavy strings) or that you could adjust the height of the strings from the fretboard, so it had been like playing an egg slicer !

That painful experience might have been the end for my guitar 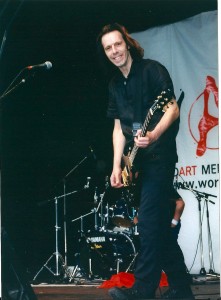 playing if I hadn’t again met some much more experienced electric guitarists a year or two later. This all coincided with adolescence, a bunch of new friends, exposure to a ton of “long hair’, music, girls, motorbikes and all that this heady cocktail brings with it. So I was hanging with some very good guitarists, copping some huge influences and in general loving my newly adjusted and easy to play guitar.

In the years that followed I became a guitar obsessive once again. I just wanted to know everything. I stole every riff, chord and trick I could find, covered my walls in scale diagrams, bought second hand guitars, amps and FX pedals and read every tutorial I could find. I became that most odd of creatures – the bedroom guitarist!

Eventually I though I was good enough to be in a band – people told me so and eventually that happened. The Negative Emotion was Born ! ….and died, as did many other short lived ensembles. Then I met my future partner when I joined her band Moondew and a new adventure began.

It’s time to finish this abridged story so to keep it short. During the next 10 years we worked as a couple with Mo singing, playing bass, guitar and keyboards (not all at the same time !) with lots of great friends and in several different countries. We did support tours with a well known 90s band, played a festival or two and had many adventures. We even came pretty close to getting signed up once but we always stuck to creating original music – thank you Guitar !